I had a general idea of what I was dealing with, but a box labeled, “home office,” or “kitchen” didn’t tell me much. Every time I sliced through the clear packing tape at the top of each box I was always surprised by what I found inside.

There were a lot of boxes to unpack and here it is, five months later, and I’m still unpacking. The move to Texas happened fast. I didn’t have time to purge and declutter before things got boxed up. In fact, I didn’t even box them up myself. A moving company moved us and was responsible for all of our packing–hence the mystery–so not only did I not thin out everything as things were packed, I honestly didn’t know what was in each box.

There’s help for this, I’m sure.

For some reason I hang on to a lot. Not exactly like a hoarder with rats running around and a stack of plastic florist card holder sticks and Cool Whip containers, but I hang on to every ticket stub for events I’ve attended, Playbills for every show I’ve seen, every Christmas card and Birthday card received, and notes from people. I’ve also hung on to interesting articles I’ve found. Most of what I’ve collected over the years I put into binders to form a visual journal of each year. Some people call this scrapbooking, but mine don’t look like scrapbooks. They’re just organized in binders like what a historian would keep. Yet here I was, facing all the accumulation of what I had been hanging on to–including the binders, but mostly files upon files of random things I had collected.

At least I was somewhat neat and organized about it. I had labeled manila files that helped me organize all the things that didn’t make it into the yearly binders–things clear back from high school. I had files labeled–

And then after I had peeled away layers of manila folders, underneath I found this: 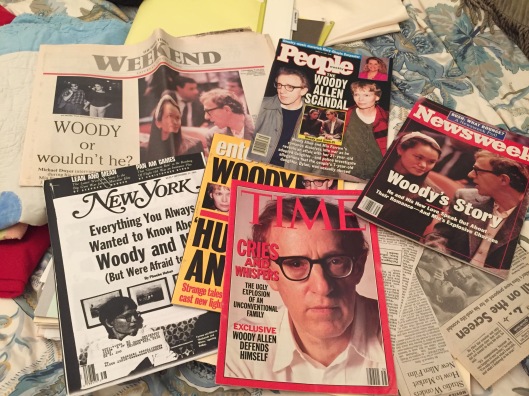 I had been a long-time fan of Woody Allen so when the news of his relationship with Mia Farrows’ daughter, Soon-Yi exploded I was immersed in it all. I had collected everything in print on the news about the subject during a time long before social media and even before the Internet had matured enough to serve as a news source.

So here I was, faced with all these memories and I had to decide. Do I keep or throw away? On one hand, they are memories and they are about who I am as a person., which is exactly the reason I had kept them in the first place. But then on the other hand, it totally didn’t make sense to keep them. I didn’t have room for them in my house, and let’s be honest. I didn’t have room for them in my life any longer.

Then it occurred to me. This is exactly that moment this collection of memories was designed for. It’s as if they were all sealed up in a large metal box with a date on the outside that said, “Don’t open until 2015.” This was my time capsule.

As I approached each box and each folder inside, I spread the contents on my bed and spent time with them. I looked through everything and then I dumped everything. (Well, most everything. I actually discovered some important documents in the process–like an excerpt from a grandparent’s journal.)

I read every email that was printed out and laughed when I re-read the exchange with my friend Joe as we both secretly vied for the attention of a handsome co-worker, Trevin, and then they all went into the trash. I looked through each of the wedding invitations I received and fondly remembered the connections I had with the sender and then into the trash they went. I smiled as I leafed through the George Michael Fan Club material, remembering the evenings I would put his Listen Without Prejudice Volume I CD on repeat and write in my journal. Yes, all my George Michael dreams went into the trash as well.

These were a time capsule that I had put together in my twenties that were a definition of who I was at the time and here it is twenty or so years later to discover that, while they are wired into my DNA, they aren’t who I am anymore. They were certainly seeds that grew into who I am now, but I’m not a seed anymore. I’m a tree now.

Purging and decluttering is an emotional exercise. It wasn’t until I realized that I’m not that twenty something person any longer that I could let it all go. During the unpacking I gave myself my moments of reliving exactly what was intended when my twenty something self put these things in a manila folder—to remember and look fondly on those times, but move forward.

Now, on to my closet. I’ve got some unfinished business there too.