“It’s here, I’m sure it is,” I said. “I mean, it’s a big ass canyon. Where could it have gone?” It was an October morning and we had just walked on the paved trail from our cabin, following the signs to view Bryce Canyon. The fog was so dense I couldn’t see more than five feet in front of me and the colors that would have been there—the red rocks, the green sage—had been washed away as if we were catapulted into a black and white movie from the forties. And the canyon. It was gone.

It’s as if it were Brigadoon. 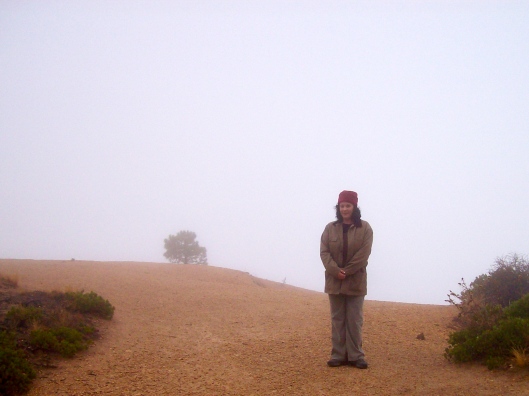 That’s me in front of Bryce Canyon. Yes, really. 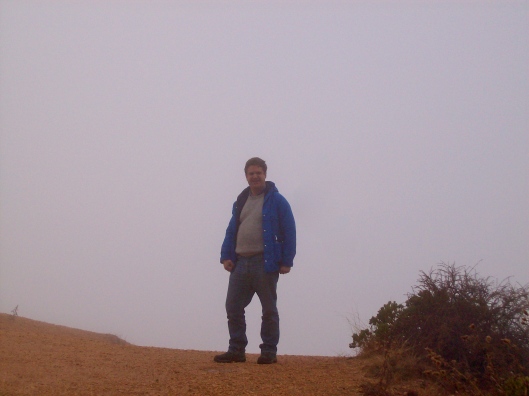 This was our third rendezvous. We were now on the same continent, which was progress, I thought. It had been two and a half months since our rendezvous in England and six months since we first met in Scotland where Steve had been living. I was so excited to take Steve to see Bryce Canyon. I actually hadn’t been since I was a kid on a family vacation but I remembered the orangey red clayish rock and the hoodoos that pointed up to the sky like a million little fingers. This time was different. I had a geologist with me (Steve) and he narrated our five hour drive from Salt Lake City to Bryce Canyon with explanations about the different color of rock, the strata and iron.

Alas, my excitement and anticipation of experiencing Bryce Canyon with Steve unravelled like an old sweater. I was bummed. I really wanted Steve to see this beautiful part of Utah and the weather ruined it. It’s like traveling a long distance and finding that the museum you wanted to visit is closed. Or that all the tickets to a tour are sold out. Just as we were beginning to turn around on the path back to our cabin a couple emerged out of the fog. Really. Like right out of the fog. They could tell that we were a bit disappointed as we were snapping pictures of each other in front of a backdrop of white and as they approached us one of them said, “You have to take the trail down. It’s beautiful down there and the fog is beginning to lift. You see more at the bottom.”

No convincing needed. Off we went down the trail. 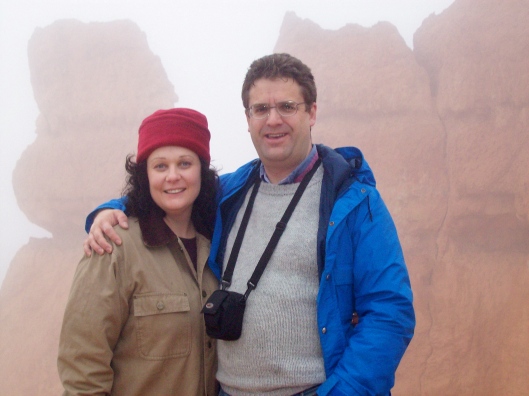 We walked down, down, down and we began to see the red rock. Fog curled around the hoodoos and the more we walked down the less fog we saw. It was quiet—there weren’t very many people around, but what I thought at first to be a disappointment ended up being an extraordinarily unique experience in one of the most popular National Parks in the U.S.

Bryce Canyon, alone, is a spectacle to behold, but without all the summer tourists and with curling, swirling fog, it’s a whole different experience. Not many people get to experience Bryce Canyon this way: 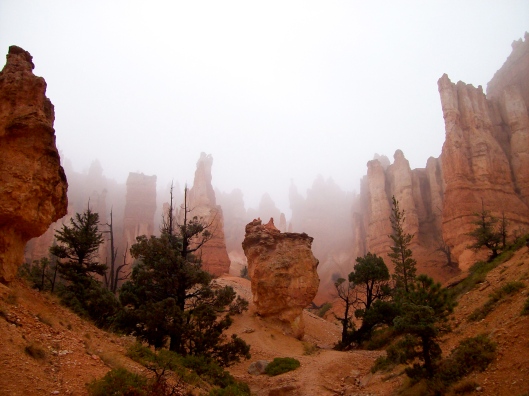 I imagined that maybe I was on another planet. Is this what people mean when they say,”Out of this world?” If so, I totally get it now.

Four years later we visited Bryce Canyon National Park and as we walked down the same path on a warm September day we saw the hoodoos standing upright without the curtain of fog, and in unison we said, “So this is what it looks like!” 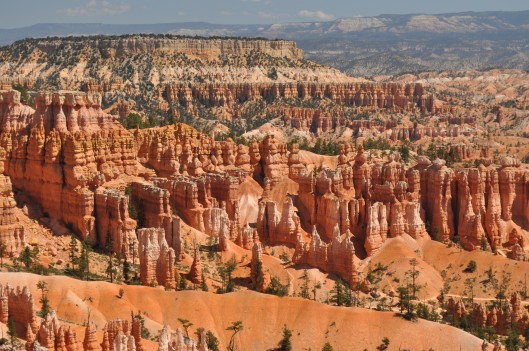 For more pictures of Bryce Canyon National Park check out the photos in the slide show.

Uh, yes. That’s me in front of Bryce Canyon

You have to admit, it’s kind of cool looking.

Hey look! We the fog is lifting!

Waiting for the fog to lift.

On our hike down to the bottom

11 thoughts on “The disappearance and reappearance of Bryce Canyon”