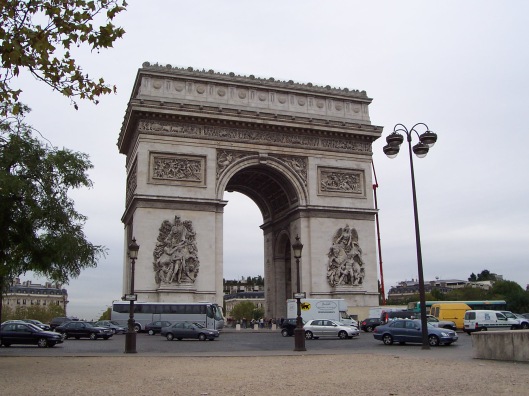 Seven hours. That’s all we had.

Our plane had just landed at Charles de Gaulle Airport in Paris and we had two choices: A) Sit around the airport for seven hours or B) Get into Paris somehow to see something. Anything. And get back in time to catch our flight to Venice.

We went with B.

I’m generally a planner and I follow rules. Both planning and rules seem to keep me out of trouble and keep things “safe” for me. They also, I’ve learned, spoil adventures and don’t leave much opportunity for serendipity to call on me. So this time adventure trumped “safety” because I wanted my mom to see Paris–even if it was just for a few hours. We were on our way to Venice to begin a 14-day Mediterranean cruise and it was just too tempting to not let her see one of Paris’s storied landmarks during our seven-hour layover.

I had been to Paris before on business but my mom—this was her first time. So we had a mission and our adventure was bound by a clock, which made the whole thing a little bit more exciting.

I love Paris, but I have to tell you, the airport just wears me out. For some reason, Charles de Gualle airport is a serpentine of stairwells and hallways you have to navigate through. And it doesn’t help that the airplane I generally arrive on doesn’t even drop me off at the actual airport building, but somewhere in the middle of the tarmac.

Down the steps of the plane onto the tarmac. (Am I the only one who thinks she’s going to fall down the plane’s stairs?) Then on to a shuttle, then through a door, up a small staircase, then down another hall, down another staircase then up another staircase, then down more hallway. Every time this happens to me I’m convinced I’m going the wrong way and will end up in the employee locker room.

Can someone tell me why this line isn’t moving?

Once we saw Customs and Immigration we were relieved to find that we were indeed in the right place, but the line wasn’t budging. No one moved. We were in line for nearly an hour (tick tock, tick tock) and we were losing time on our adventure. There was only one immigration officer’s booth open and he wasn’t moving very fast either. After the hour passed the line started moving again. (It was around lunch with very few workers at this time. Just keep this in mind if you try this on your own, kids.)

One reason to love the French: The Air France Bus into Paris

Because I did my research ahead of time I learned that once we went through immigration and checked our bags in for the Venice flight all we had to do was make our way to the Air France counter between terminals 2E and 2F and we could catch a bus into Paris. It had been two hours since we landed.

Five hours left in our adventure.

Catching the bus into Paris couldn’t have been easier and it was only €24 RT for each of us (and by the way,1/2 price for kids under 11 years). We found the Air France counter, paid our fare and hopped on the bus (which leaves every 30 minutes) for the hour-long bus ride into central Paris.

This is what I look like after a long flight from the U.S.

The driver dropped us off at the Arc de Triomphe where my mom and I shot photos of each other, visited a typical Paris café and she had French Onion soup while I had quiche—so cliché but oh so French! After our lunch we wandered around the corner, admiring all the Parisian street lamps, the architecture and the bakeries—yes the bakeries! We each bought a pastry and then decided we needed to catch our bus back to the airport.

The cute Parisian cafe where we had lunch

We weren’t rushed, we weren’t worried. We were simply caught up in our little slice of Paris. It was kind of like visiting a library where you flip through the book while you sit in the comfy chairs but you’re not committed enough to check it out of the library and walk out the door with it. We were just browsing Paris.

Right when we got to the corner where our bus dropped us off our bus to take us back to the airport just arrived. We got on and took the hour-long journey back to the airport. We went through security again and found our gate just as they were calling our names to check in.

We checked in at the desk and then plopped ourselves into two chairs next to each other. And then my mom said, “That was really fun!”

Mom, let’s go back to Paris sometime and really spend some time there. Paris isn’t a seven-hour kind of place.