My phone displayed that I had a voicemail. Normally I don’t bother with my phone while I’m traveling abroad, and I figure that I’ll listen to voicemail when I get back to the U.S. Besides, anyone important who needed to reach me while I was on holiday in Bath, England knew to just text me.

Castle Comb in the Cotswolds

It was day three of my epic romantic rendezvous in Bath, England with my long-distance suitor I met in Scotland just eight weeks prior. No distractions. No phones. Just the two us to discover Bath, the Cotswolds, and to see if I could muster the courage to say, “I love you.”

But the phone. There was a message on it and I had this feeling I needed to listen to this voicemail.

“Hi Lisa,” the voice said. “This is Jana, Jessica’s sister. I’m sorry to have to tell you, but Jessica passed away and I know you two were close and I found your phone number in her address book. I wanted to let you know when the funeral will be, so call me at….”

I just stood there looking at the stupid phone in my hand. Tears welled up in my eyes so fast that it felt like they were coming like a big wave that crashes on the shore. I inhaled and then crash! I couldn’t stop them.

Jessica and I worked together in Menlo Park, California back in the 90s. When I moved away we phoned each other weekly and wrote long epistles back and forth to each other over email where we lamented about men, our jobs, men, our coworkers, men. You get the picture. We would even watch the Oscars together over the phone and make snarky comments throughout the show. (This is what we did before Twitter, my friends.) We went to Giants games when I would come to town and traded books through the mail.

She also had lupus and had contracted an infection from a pedicure she received from a salon in her neighborhood. The infection was so bad she was hospitalized the last several months of her life and I frequently called her at El Camino Hospital in Mountain View, knowing I could be easily directed to her room where I would update her on what happened in Scotland and this fantastic guy I had just met.

Steve walked in the room and I looked up at him and he had that look on his face—the “Oh crap, she’s crying. What do I do?” look. I blurted out the words, “My friend.” Tears not just rolling but pouring down my face. “She’s dead,” I continued. “Her sister. She left me a message.” I couldn’t breath and pressed my face into his chest and sobbed. I sobbed big heavy, almost-hyperventalating tears.

The “I love yous” and the never-ending tears

I’m in Bath. Just the night before I said, “I love you” and he said it back (thank goodness). Big moment. Colossal moment. This is the desired outcome Jane Austen writes about, but I was grieving. I pulled myself together and we went downstairs to breakfast where our Bed and Breakfast host served us breakfast while I gave up trying to control the tears that seemed to never ever stop. I was sure that the other guests and the host thought we had been fighting.

A church in Castle Comb in the Cotswolds

Move on with our day’s plans. That was the only thing that we could really do. This was the day we were going to discover the Cotswold region. Every guidebook seemed to write lovingly of the romantic quaint region with its stone homes, thatched roofs and cream teas. I studied the region ahead of time. I was prepared to get wrapped up in it, but I was sad. So very sad. 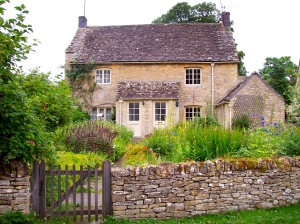 The verdant landscape of the Cotswolds was like looking at a poem. There is a cadence to the hills and each little village was like hitting upon the rhyme at the end of a line. They all looked similar, but they had their own character, like words that sound the same but aren’t. It wasn’t a sad poem and it wasn’t a happy poem, but it was a comforting one. 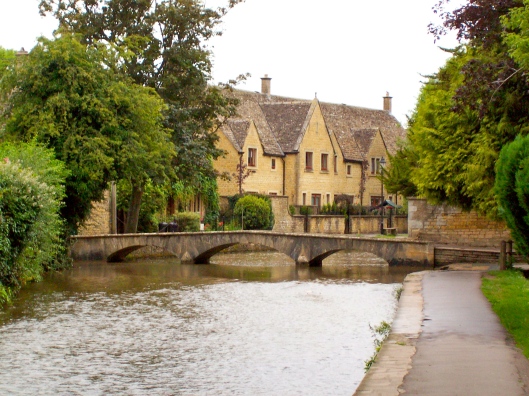 Bourton on the Water

We held hands as we walked along the pathway at Bourton on the Water, and we would have moments of silence and then I would start talking about Jessica. Then I would tear up again and return back to silence. I didn’t quite know how to feel. My heart hung heavy with grief, but was also bursting out of my chest with spectacular joy and the feeling of being in love. I couldn’t have been in a more bifurcated moment in my entire life. Or is it possible to have two hearts in this kind of experience?

This picture with smiles and a sad heart

I wanted a photo of us in this lovely place. I asked a man if he could take our photo and Steve and I sat on a bench. “No, no,” the man said as he pointed to another bench. “Sit over here. It’s much better.” We moved to the other bench and the man, who turned out to be a photographer, took this photo with my little Kodak point-and-shoot camera. This beautifully, perfectly angled photo.

I feel like I’m spoiling the ending here but you know already that I married that man. Fast forward almost two years later and as a wedding gift, the women at my church had an artist paint a portrait based on this photo. When they revealed it to me I wept again. This photo took me back to that time when I was swept up in love in England, where “I Love Yous” were exchanged, and if you look really closely you’ll notice that in my heart I’m grieving the loss of my friend, Jessica. 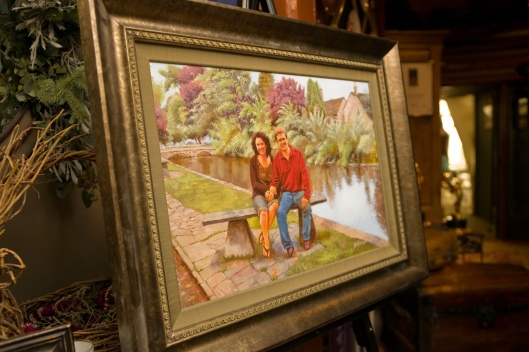 Continue to next chapter.