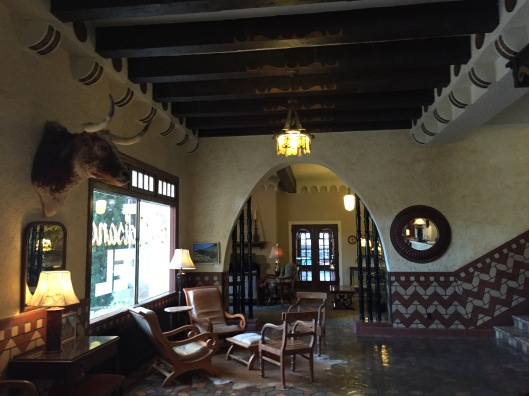 Upon arrival the hotel desk clerk hands me a piece of paper—a photocopy of a chart someone put together—titled, “Marfa Time.” It contained a list of the different restaurants in the area including what times they opened and closed. Some were only open Thursday – Sunday. Others showed that they were opened all week, but with different times on different days. One restaurant, the Grilled Cheese Parlour, was only open from 9:30 p.m. until whenever it decides to close.

The paper not only is a helpful guide for Type-A folks like me who rely on the regularity of structure and predictability, but the chart of inconsistent and unexpected times gives you an immediate sense of Marfa. Basically, Marfa does what it wants to do when it wants to do it.

But it wasn’t the food that brought us to Marfa, or the art scene I’d heard about or the general quirkiness of Marfa, Texas. Frankly there were two reasons we stopped over in Marfa for a couple of nights during our 11-day West Texas road trip:

Prada in the middle of the desert

Yes, I’ll admit it: I love shopping. But I also love irony, so when I heard about this strange art installation in the middle of the desert I had to see it with my own eyes. I won’t pretend that I know a lot about the installation. What I know is basically what I read here from Wikipedia in advance of our trip.

It was on our way to Marfa, after visiting the Carlsbad Caverns National Park, that we finally found the Prada structure. You can’t miss it. It’s on U.S. Highway 90, and about 26 miles northwest of the city of Marfa and from a distance you might think it’s a little convenience store on the side of the road. We weren’t the only ones who pulled over on the side of the road to get a closer look. There was a woman on the opposite side of the highway, with her back facing the Prada structure and taking photos with her phone of the flat landscape that stretched for miles. When she finally turned around to take snaps of the Prada structure,  I asked her if she’d like for me to take her picture with it. I stood in the middle of the road (because no one is on this highway) to get as close as possible without losing the visual of the broad, expansive dry  desert and snapped a picture of the lone woman in front of this ironic structure.

I, of course, had done my Wikipedia search prior to our trip, so I expected to see Prada in the middle of the desert. Perhaps the woman did as well. But then a long camper pulled up and sat alongside the road for 20 minutes before a stocky couple in their 60s waddled toward the structure (waddling like all of us do after sitting for too long driving through West Texas). Did they know about this or did they just stumble upon it and thought, “What the hell? Why is this here?” I hope so. That’s what makes Prada Marfa so delicious.

Now that I could check Prada Marfa off my list, I moved on to my second and even greater love: old movies. During the rest of our drive toward Marfa I pretended to be the eyes of director George Stevens (or his location scouts) in the search for the location for Giant. It must have looked exactly like this 60 or so years ago. Where was Riata? I wondered. Where was Little Riata?

In my mind I can’t separate Rock Hudson from Bick Benedict. Liz Taylor is Leslie and James Dean will always be Jett Rink. It’s all a messy beautiful combination in my head that makes sense to me. Rock Hudson is straight and madly in love with Liz, and by the way, I swear Brad Pitt was channeling Jett Rink/James Dean in Thelma and Louise when he was leaning against an outdoor sink on the side of the road before Thelma and Louise turned around and picked him up. (So confusing my reality even more.)

I hadn’t seen the movie, Giant, until I was in my 30s. A local movie theatre would play classic movies on weekends and Giant was on my list of Top 100 films (according to the American Film Institute) that I was ticking my way through. Not surprisingly, I was the only one in the theatre. The movie, based on Edna Ferber’s book carried themes of racism and strong women—surprising themes for the 1950s, but themes that reached right into my heart.

It was late in the day when we checked into the Hotel Paisano and I was handed the “Marfa Time” piece of paper. Unless you stay in Hotel Paisana, my guess is that the deep roots of Marfa and its connection to Giant is completely lost on most visitors.This was the same hotel where most of the cast stayed for about two months during filming. Rock Hudson and Liz Taylor each rented homes in the area rather than stay at the hotel, but newcomer James Dean! Dennis Hopper! They were there.

Rather than do the normal thing and seek out live music in the area or eat grilled cheese sandwiches at 9:30 p.m., Steve and I stayed in. I downloaded from iTunes the PBS documentary, Children of Giant that aired last year and Steve and I watched it on my laptop as we laid in bed eating squares of chili dark chocolate.

Edna Feber’s book was controversial with the oil tycoons of Texas, portraying them as big wealthy controllers of power, and it called out the discrimination between Mexican-Americans and Anglo-Americans. Layer on top of these themes director George Stevens’ recent return from World War II, having just filmed many atrocities, particularly in the Nazi concentration camps once the war had ended. This combination—Stevens and Ferber—is why the themes in Giant worked well both cinematically and on a social conscious level.

According to the documentary, even while filming in Marfa there was a separation between Mexican-Americans and Anglo-Americans. “A literal separation by the train tracks,” the narration from the video said, and just as those words came out through my laptop’s speakers, the loud “HOOOOOT! HOOOOOT!” came as the train, only a block from our hotel, rolled down the tracks.

We looked at each other. “Whoa. That was weird.” I said.

The reality of it all set in. Just days before terrorists exploded several bombs in Brussels. The election for a U.S. president has incited both anger and separation in my country, where we act like a political election is rooting for our favorite football team. It’s “us” against “them.”

And over the past year, racial tensions appear to be on the rise in the U.S. “It’s been the year of outrage,” a friend recently said to me. Yes, we’re all outraged right now. Terrorists. Candidates. Citizens of all colors.

No one wants to listen to anyone.

It was a weird time to be in Marfa and thinking about the movie, Giant.

The end of the movie is one of my favorite scenes. Bick and Leslie, both with gray hair, are slouched on the couch.  A few minutes prior you witness a major transformation in Bick when he protects, not just the honor of his Mexican-American daughter-in-law, but of some Mexican-American strangers who were refused service in a diner where they were eating. He doesn’t win the literal fight that occurred in the diner, but he did win in that he changed.

As he and Leslie are relaxed on the couch, Leslie shares that she’s never been more attracted to Bick than when he fought for what was right. (Oh, how I love that sentiment.) And then as the camera turns to the their two toddler grandchildren in the play pen in front of them—one white- and one dark-skinned, and right then you know that Bick has not just accepted how his world is changing, but that he has changed. You know this because of the affection he shows in his eyes and that the cuts and bruises he still has on his face from the diner fight were to protect everyone from racial discrimination.

There are a lot of terrible things going on in the world today. I’ve always wanted to live in a world where things got better and improved, not get worse. But Giant reminds me that we may not win, but we can change.

There is great irony found in Marfa and in the desert. Whether it’s Prada that can represent whatever you want it to represent, or if it’s Hollywood descending on the desert to make a film. Or if it’s that the Marfa cemetery still had a fence separating Anglo-Americans from Mexican-Americans even up to last year when the documentary, Children of Giant, aired. (I didn’t check to see if that was still the case in 2016.)

Do we really change? I hope for that. I really do.