You quickly forget that you’re at 8,200 feet (2,500 meters) above sea level. It’s those Andes mountains towering around you at all sides that give you the feeling that there are higher places than this. But the evergreen pines remind you that you’re not in the lowland tropics known for their broad-leaf fig and cecropia trees. But keep your place slow and steady if you’re not accustomed to this elevation, and there’s reasons beyond your lungs to keep it to a leisurely stroll.

In the highlands of Ecuador, just under 300 miles (482 km) south of Quito, you will find the city of Cuenca, a UNESCO World Heritage Trust site with a half million residents who are happily content living at 8,200 feet. And yes, you can walk quite easily.

You can run too

Give it some time and you just might even be able to run like these folks were doing this morning at the annual Festival Fundación de Cuenca 15k, which boasts participation of 20,000 people. During this visit to Cuenca, residents were spending the days approaching Cuenca’s founding (April 12) by celebrating and running–even at this high elevation. It’s notable to mention that Ecuador’s first olympian, Jefferson Pérez, a speed walking athlete is from Cuenca. He took gold in the 1996 Olympics (Atlanta games must have been a breeze at that elevation), and in 2008 he walked away with the silver in Beijing.

It’s still before noon and women begin setting up big trays of fluffy Espumilla, a cloud of merengue topped with fruit and sprinkles. It’s a tradition and each woman adds her own unique touch. It looks like ice cream and when you dive your mouth in to take a bite, you take a bite of a light cloud. Sure, the density isn’t there, but the sweet lightness takes away any guilt of having this decadent treat before lunch.

A local woman scoops up some Espumilla and adds some coconut

A church for every week of the year

There are 52 churches in Cuenca, many which are steeped in Cuenca’s history, hence the UNESCO site status. You could spend a lifetime in Cuenca, which includes City of the Crosses as one of its nicknames, learning about all the histories of the churches, but the most notable is the Cathedral of the Immaculate Conception, where it’s a case study in bad planning. The architect, Juan Bautistat Stiehle—a German-born friar—miscalculated the ability of the building to hold higher towers, so the towers were shortened, and the construction took a century to complete. Locals call it the “New Cathedral,” even though it was built beginning 1885. It’s “new” because the Cathedral replaced the nearby “Old Cathedral” that had become too small.

Cathedral of the Immaculate Conception

Around lunch time is a perfect time to get to the market. There are several indigenous mercados (markets) in Cuenca where you will find fresh meat, seafood, fruits and vegetables exploding with color and assaulting your nose with a vast mixture of aromas. It’s a little crowded at that time, but being hungry is the perfect time to have your mind opened up to all the varieties of potatoes, prickly fruits and fish all laid out for selection.

The biggest market is the Feria Libre (Free Market) at Avenida de las Américas. This indoor market offers two floors and is naturally sectioned off according to offerings. Do not miss the Tree Tomato, which is a shame it’s not able to be grown in the United States. Just a block away outside is the flower market. Again the fragrances of all the flowers slam your nose. Cut flowers have been a major exporting business of Ecuador so the variety and quality is extraordinary. 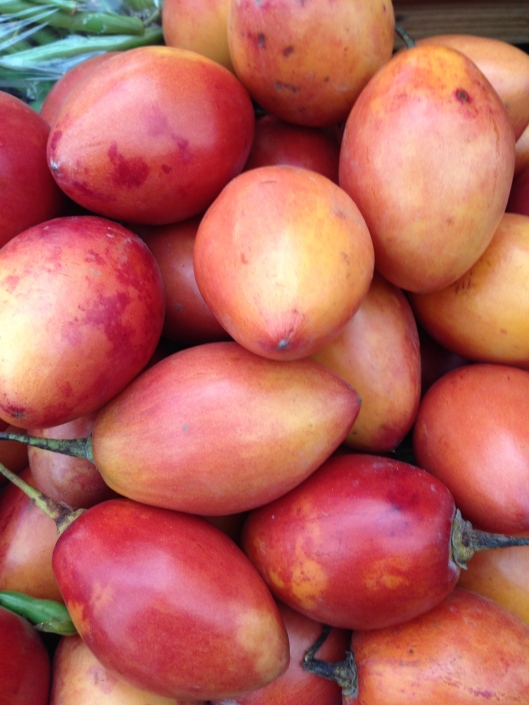 Let’s turn down the quiet streets and peak into the daily lives of Cuencans. We almost missed it, but there is a man spotted in a tiny cut out of a building who repairs Panama hats for around $1.50.

A man repairs Panama hats in his tiny shop.

And we stumble upon a pretty blue door into a café.

Pretty penmanship and pretty blue invite you in.

Looking out on the city

We end the day with a little drive to Mirador de Turi where we inhale the view of all of Cuenca. It’s a little like feeling as though you’re looking through a fish-eye lens when you see that Cuenca sits in a bowl.

Cuenca in Spanish translates roughly to “confluence of rivers,” where the Tomebamba, Yanuncay, Tarqui and Machangara rivers—all which part of the Amazon river watershed—meet up in the colonial town. It’s no wonder that Cuenca feels like a place of meeting and congregating with mountains that surround it at all sides like a big hug.