My twitter pal, Natalie (@_nctaylor) is in Costa Rica right now and has had the pleasure of discovering Howler Monkeys, which of course is cool, because I love it when anyone finds Howler Monkeys interesting. (Who wouldn’t?)

Sharing in Natalie’s excitement over Howler Monkeys, combined with my own thrill in preparing for our upcoming trip to Panama prompted me to dig up this video from last year’s trip to Panama. You can hear (but not see) the two groups of Howler Monkeys battling it with their lungs in a bit of a territory dispute as we listened atop the tower near the Discovery Center at Pipeline Road. They’re in the distance, but imagine being in the very same jungle with these guys. My heart was beating very fast with both joy and terror. But mostly joy because I wasn’t in the way of these howlers.

The real treat, though, is Steve’s spot-on impersonation at the tail end of this. Go ahead, give it a play. It’s short and totally worth it if you’ve never heard a howler monkey before. (Or if you’ve never met my husband either.)

Yeah, that’s my husband. He’s a Howler Monkey. And this is him birding, too:

Don’t fall off the bridge. That’s what the handmade sign instructed.

Steve and I had jumped out of the SUV to help guide a nervous M* as she drove across the rickety bridge. Both of us didn’t need to direct her. I only joined Steve because I was about ready to strangle M. But while Steve motioned to her like an airport ground worker guiding a plane on the tarmac, I imagined that I could direct her right off the bridge. The trouble was, it wasn’t much of a drop.

Still, it was a fantastic idea. 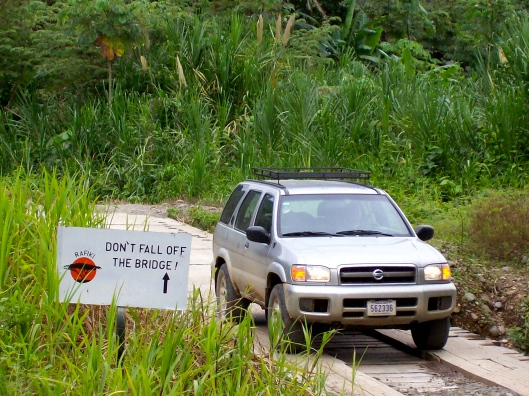 I’d heard of the bad traveling companion—the annoying person who wants to do things his or her way, all the time—but I never had experienced it until this trip. It started with M wanting to go to Costa Rica to look at property for a vacation home. She was going to be there for six weeks and suggested we join her for 10 days. It would be so much fun! Steve and I had been dating for a year now, albeit long distance, so I met with both of them in Calgary and the three of us excitedly put plans together. M would pick us up at the airport and we would spend time in Monte Verde, visit the coast and she would return us to the airport at the end of our trip. It was all set—fairly straightforward and simple.

Sometimes you can’t predict what can happen, but here are some suggestions to help you avoid a trip from hell with a bad traveling companion or what to do when you find yourself with one. It includes notes from our trip and how we handled (or didn’t handle) things.

Try to find out ahead of time who you’re traveling with. Steve knew M who was a family friend, but I failed to find out details of her personality. I think we both got caught up in the idea of going to Costa Rica and weren’t thinking about how it would be traveling with M. I had met her a couple of times but I didn’t realize that it was going to be all about M the whole time. Steve and I like to have a little structure to our travel planning and as it turns out, M only wants to do what she wants to do when she wants to do it. In retrospect, I should have pressed Steve, who knew M more, to find out a little more about M. But I didn’t and to be honest, a little women’s intuition could have circumvented the situation.

Look for signs that it might be a disaster. Our first clue was when M called from Costa Rica the day before we were to leave and said she wouldn’t be picking us up at the airport, but told us to instead catch a bus to Quepos. Her sudden diversion from the itinerary should have been our first clue. She was supposed to meet us at the airport in San Jose where we would drive to Monte Verde. Quepos was the opposite direction and on the coast.

Once we landed, we instructed the taxi driver to take us to the bus station. “You don’t want to go there,” he kept telling us. He eventually dropped us off at the corner at the bus station and sped away, screeching tires and all.

I get the fact that bus stations mostly tend to be in the most dilapidated parts of town. (Same thing even in Salt Lake City, Utah.) It was nice of the taxi driver to warn us, but we weren’t rattled by the ambiance of the neighborhood. What did rattle us was the closed ticket office. Now what? We were standing in a sea of locals looking confused because we were confused.

A man in his twenties took pity on us and with good English he said we could just pay on the bus, but because we didn’t have tickets we had to stand. And stand we did. For four hours. On a bus that was making every stop from San Jose to Quepos. Normally I would look at something like this as an adventure, but it’s an adventure when it’s your idea. Not an adventure when someone else is controlling your destiny. It was our own version of The Hunger Games.

When we finally arrived at Quepos, M was there waiting, but was hysterical and mad, waving her arms as she shouted, “Where have you been? I’ve been waiting here for over an hour!”

One of the many hostels in Dominical, Costa Rica

Be flexible. Admittedly, sometimes the bad traveling companion might divert the plan in a different way and so rolling with it may not be a bad idea (at first). We discovered Quepos, which is a place I’d certainly visit again. M’s plan also took us to Dominical, an honest-to-goodness surf town, and we were lucky enough to find a nice property that was fairly new. It was a welcome relief because when we first arrived all we found were very–and I mean very–rustic hostels. Maybe if I was twenty, I thought. And didn’t care about getting lice. But we kept pressing M about Monte Verde. When were we going to get there? She would never answer.

Have back-up plans. At about Day 3 we realized that M had no intention of going to Monte Verde. Steve and I wanted to go there to see the birds, particularly the Resplendent Quetzal. This realization led to a blow up between Steve and M and then M locked herself in her hotel room with the keys to the SUV.

We were stuck at our hotel, which wasn’t convenient to any services and it was dinner time. I went to the hotel’s front desk and using my best Spanglish and sign language, asked the man to get us a taxi. For about $5 we went into town and Steve and I had a fantastic dinner with an amazing sunset. A sulking M spent the night in her hotel room without dinner just to make her point.

Try to look on the bright side. At one point M was driving so fast I was actually a little terrified. Steve kept telling her to slow down, but she wouldn’t. Oh, it was sweet justice when she got pulled over by the police. He demanded that she pay what ended up being roughly $80 before he let her go and then he pocketed it. As I sat in the back seat I had a smirk on my face. I am not ashamed. 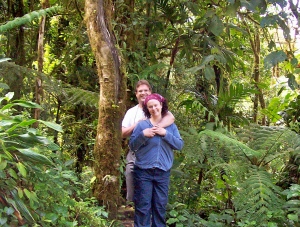 With Steve in Monte Verde

We did eventually make it to Monte Verde, but not without a lot of arm twisting.

I kept trying to look on the bright side, which was that Steve and I were together—a precious rarity, since we had an intercontinental courtship. I wanted to befriend M, but just couldn’t on this trip. My time with Steve was valuable to me and so if I just pretended that she wasn’t with us I could truly enjoy my surroundings and my guy. We were also in Costa Rica, which was amazing. The lush green ferns and mossy trees in the cloud forest gave me my first jungle experience. It also was my first time birding abroad and it was here where I became addicted to birding.

Other cherished moments from this trip included when we saw 50 or so hummingbirds at a hummingbird garden, got peed on by a howler monkey, and saw the Resplendent Quetzel.

You may just have to bail. One of the things I wanted to do most in Costa Rica was zip lining. It was our last day and M didn’t want to do it, so Steve and I ditched her and went on our own. Zip lining was so fantastic. It was scary and thrilling at the same time. Best of all, there was no M.

Looking back, we should have bailed from the start. Since M wouldn’t pick us up at the airport at the beginning of our trip we should have just rented our own car and had our own trip. Every day of our 10-day rendezvous to Costa Rica was an argument and crescendoed to the final blow up when she announced to us that she didn’t want to take us to the airport for our departure flights as planned, but wanted us to take the bus. Again.

Steve and I won that argument, thankfully. She took us to the airport, but we endured about 2 1/2 hours of her whining about it. Better than three hours of a bus ride. Though now that I think about it….

It took me months to talk about this trip with any kind of fondness once I had returned. I was so angry at what had happened. I usually try to navigate these situations with some sort of grace or even capitulation, but M made it difficult.

There’s a lot I wish we would have done when I think back on this trip. But I’ve also learned a lot from this trip. Hopefully I’m not a bad traveling companion and since this trip I’m careful who I choose to travel with. Not all personalities travel well together. But more importantly, I’ve also tried to keep in mind what others want to get out of a trip. Tavel is expensive and for many there’s only one big trip in their life.

The other thing I’ve learned? If you delete M from all your photos, it never happened.

Photos from our trip. Notice that she’s not in a single one. (Click on any of them to enlarge and it will take you to a slideshow.)

The beach at Quepos

One of the many road-side fruit stands with fruits I had never even heard of.

The palms in Dominical

A morning walk at the beach in Dominical

Falling in love with this guy and with birding.

Flora of Costa Rica. These leaves remind me of watermelon

Can I get one of these in my yard?

With Steve in Monte Verde

Hey, look who’s not with us!

I’m looking so awesome in all my gear, doncha think?

Steve looks like, “Yeah, I do this all the time.”

We did 7 zip lines total and it was crazy fun!

Steve uses all his concentration to nail the landing.

I come in for a landing. Look at that big smile!

I know, I make this look so easy.

We visited an Orchid nursery on the way back to the airport.

See, by the looks of this photo you’d never know we were about to strangle the other person on the trip.