I do my fair share of business travel and try to do some exploring when I visit a new city. These posts chronicle those hidden treasures you can squeeze in as a side trip. 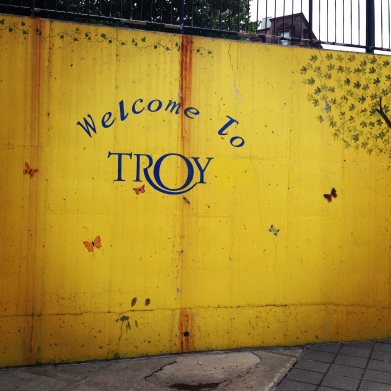 “Let me know if you think it’s a really good farmer’s market or if it’s lame.”

That’s what the woman said to me who had suggested I spend my Saturday morning at the Farmer’s Market in Troy, New York. She works at the office of the company we acquired, and she was helping me figure out how I was going to spend my Saturday morning before I caught my plane to return home, and while she thought the Troy Farmer’s Market was the bomb, she wasn’t sure how it compared to others. I was instructed to report back so she could brag with confidence (or not brag at all).

It was my second time in Troy, and this time I was going to have to stay over another night due to the airline schedule, giving me a little time to explore this city I knew little of. So, I had my cousin from Montrose, Pennsylvania—a 2.5 hour drive away—meet me for dinner, and we figured we could find something to do the next morning. And that something ended up being the Farmer’s Market.

We arrived early as fellas were unwinding ropes of cords to plug into giant speakers on several bandstands throughout the street. Turns out, not only was it a Farmer’s Market, but that Saturday it turned into the Troy River Street Festival on River Street from Fulton to Congress Streets. The streets were filled with over 100 artisan craft vendors from Troy, nearby Albany and other outskirt towns, and doors of the whimsical and quirky River Street shops were flung wide open to invite you in to try on their tie-died pants, custom-make a t-shirt, or smell their homemade soaps. Want to create some art on the sidewalk? No problem. There were big fat colorful chalks lying around and anyone could pick it up and create some art, including a 4-year old who was intently focused on drawing circles within circles. His work, I’m sure, will fill many an art gallery. Just you wait and see. 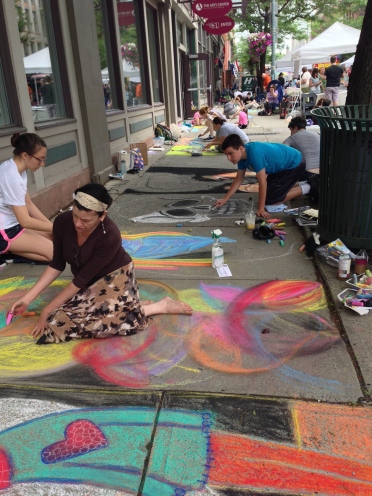 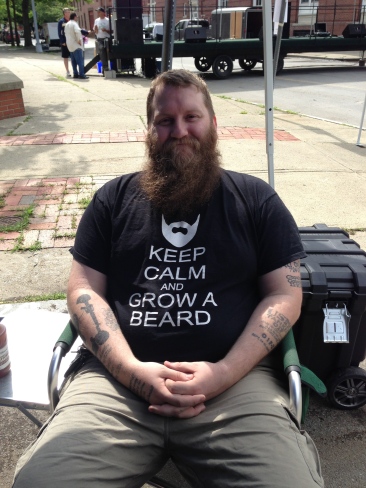 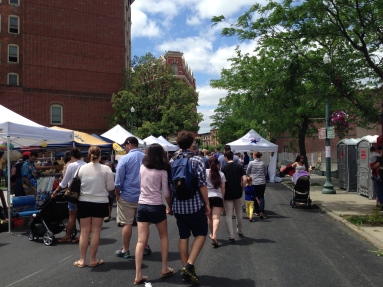 If you’re in need of some therapy there is the Jacki the Fudge Therapist from the Insane Fudge Company who had an insane amount of fudge laid out on a table. Of course I walked away with the peanut butter fudge. My cousin, Cathy, was smart and got an order of the Dark Chocolate Salted Caramel and when I bit into it (she was kind enough to share), just as the big chunks of sea salt hit my tongue my mouth immediately filled with saliva to counterbalance the salty surprise. The tangled mixture of chocolate, salt and caramel made me swoon. The peanut butter fudge was even more extraordinary. It’s tan appearance told you exactly what to expect—a dive into creamy peanut butter that was smooth as satin. Yes, this was therapy and I was happy to schedule a lifetime of appointments. 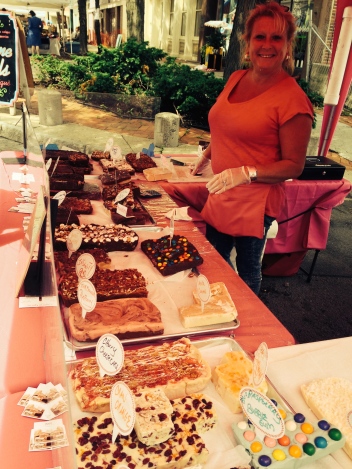 “They’ve got waffles with Nutella on them,” the woman at work had pointed out to me the day before. She had leaned in when she mentioned it as though she was sharing State secrets.

She had me at waffles. And Nutella.

We nearly walked the entire Festival before I finally found it. Not sure I walked enough to burn the equivalent calories, but let’s just say I did. Hello, lover.

We grabbed some food (yes, waffles and Nutella is a lunch) and sat next to the Hudson River while we took in the sun that finally made an appearance after two days of pouring rain. I’ll have to go back to see what the Farmer’s Market is like without the big Festival, but from what I could tell, the folks in Troy are proud of their wares, their goat cheese, their peanut butter and all the gorgeous fruits and vegetables that laid out for us to inspect. My guess is this is what you get with or without the festival part. 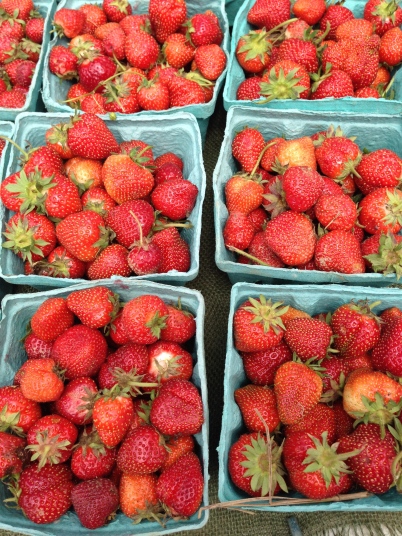 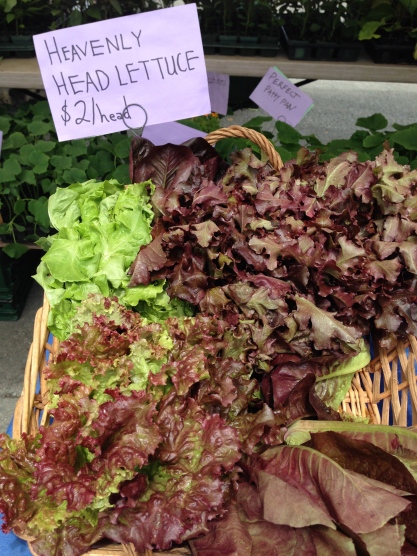 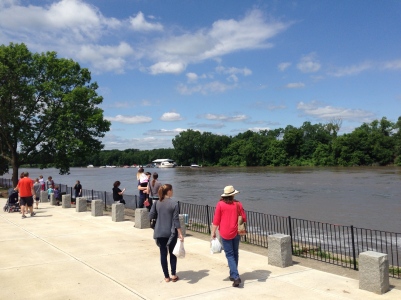 So yes, pretty good Farmer’s Market in Troy, I’d say. Sure, it was combined with the Street Festival, but it won my heart and filled my tummy with that waffle blanketed with Nutella. How can you go wrong with that? Thank you, Troy. Your Festival was a perfect way for this out-of-towner to spend her morning and your people are so wonderful, kind and terrific to chat with. I think I just might like visiting your city more often.

Do you have a favorite Farmer’s Market or Festival you like to attend? Let me know in the comments. I just might be there on business one day. 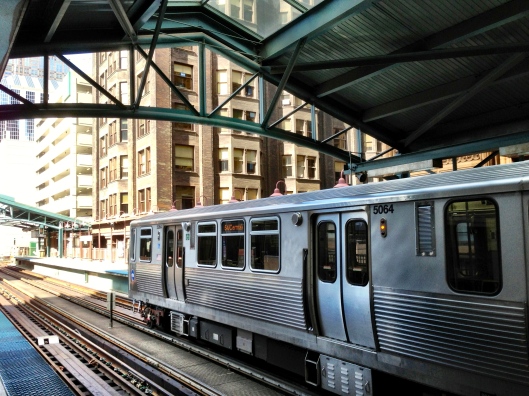 We could have taken a taxi. In fact, that’s how I thought we were going to get to Oak Park from downtown Chicago where I was staying on business. But we were taking a city bus and then the green line train. 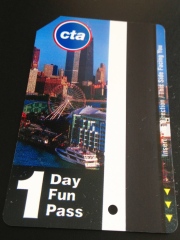 Thanks to the concierge at the hotel we were at (Hyatt McCormick Center), we were able to get a day pass for all our public transportation needs for the day at the bargain basement price of five dollars and some change.

When you travel for work, taking a taxi is a no brainer. I generally have little time and besides, I have a travel budget. But when I’m traveling for pleasure and on my own dime I often have to remember that it’s on my own dime. I’m not kidding. There’s been a multitude of times I’ve had to stop and remind myself that I’m not filling out an expense report at the end of a vacation.

The other thing I forget is that the saving time means I’m missing out on a whole bevy of experiences whether it’s people I might meet, things about a town I might learn or things I might miss seeing. And this time I coerced two colleagues to join me for our adventure to Oak Park before our meetings began, and taking the bus and train meant we had time to catch up, share insights and have an adventure that didn’t involve work.

If we had taken a taxi, sure we would have seen the Agora at Grant Park at the corner of Michigan Avenue and Roosevelt Street, but we would have only whirred by it. Since we were catching the train from the bus station at this corner we were able to walk among the statues as they were intended and felt as though we were walking among the giants.

We also would have missed seeing the storied (oh dear, a pun) Chicago Library:

Oak Park is about a 25 minute journey on the green line (a.k.a Harlem train), making it the second-to-last stop. When we arrived at the stop Cicero, I thought “Cicero, Cicero, where do I know that from?” And then I figured it out: Why it’s in one of the songs in the Broadway musical, Chicago. Ahh, now I’m getting it. The city of Chicago is a puzzle and when I get some time I’m going to figure out what Cicero has to do with that musical story. 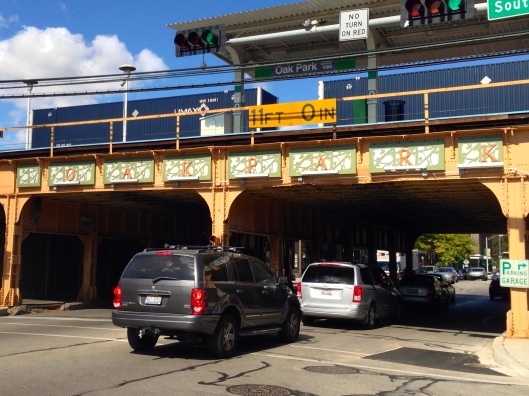 When we arrived at Oak Park, I found myself in a neighborhood of which I only had cursory information. I knew of Frank Lloyd Wright, but I could have studied more. I certainly knew of Ernest Hemingway, but it was only that morning that I learned that he was born in Oak Park. Yes, I felt a little dumb. Smart people have lived here. VERY smart people. I should have showed up more prepared.

We arrived too late to take the tour of Frank Lloyd Wright’s home and studio because we had to get back for a meeting that began at 5:30. Apparently tours fill up fast so if you visit be sure to get your tickets in advance or show up early. Same story for the Hemmingway tour. But the weather was beautiful–mid 60s, blue skies and the leaves were just beginning to dress in their red and gold couture. Maybe not a formal tour this time, but just walking in the colorful neighborhood was all we needed that day. 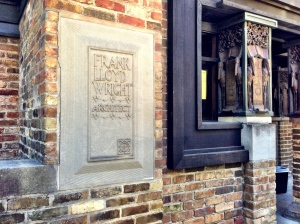 People walked around the neighborhoods with headphones, listening to a narrative tour. It would be a little strange living in this neighborhood, watching people wander around with headphones as they stared at homes with a far off stare. A little alien-like, I must admit. We chose to wander sans headphones and while our little tour was a bit of a walkabout drive by, it was a bit like eating from a sampler platter knowing that you’d be planning to go back at another time. I’d suggest spending two days in the area to take advantage of a deep immersion in both Wright and Hemingway.

In the end, I walked away with this book I bought from a very chatty woman at the little shop in the Hemingway Museum. (The sales woman was so obsessed with Hemingway and had very strong opinions on what she would and wouldn’t allow in “her” shop.) 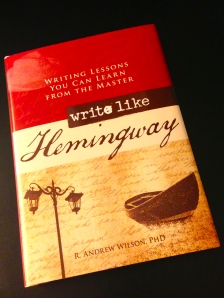 Chatty sales woman aside, perhaps this book would help me become a better writer about my travels. Yes, it’s about the journey, but for me, it’s also about the writing.

Click on any of the photos in the gallery below and it will take you to a slideshow for better viewing.

There is also a sculpture tour in Oak Park; on the lawns of various homes in the neighborhood.

Check out that chimney!

I can only hope. 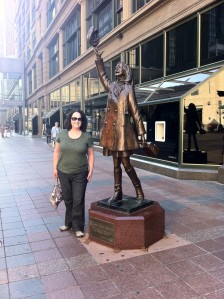 Me and Mary Tyler Moore in Minneapolis

I had to travel to St. Paul,  Minnesota for a week of meetings and ever since I was a young girl I had been fascinated with the Mary Tyler Moore show, so it only made sense that I had to go see the Mary Tyler Moore statue. (Or rather, it was Mary Richards, but for the sake of this post, I’m still going to refer to her as MTM.)