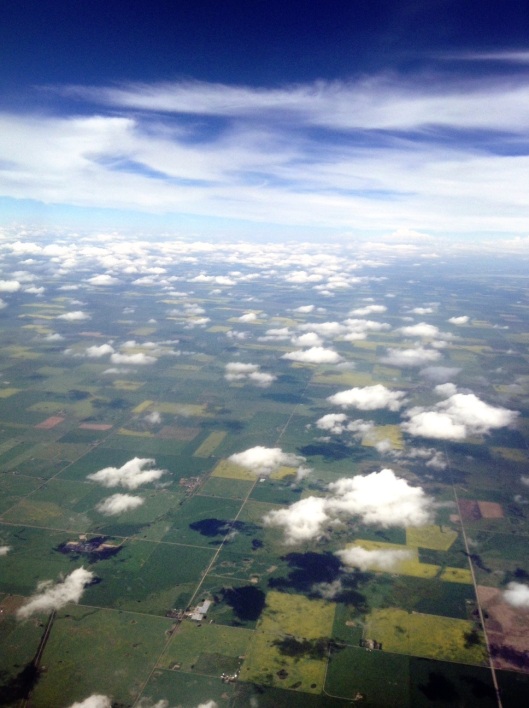 I was listening to the soundtrack of Love in the Time of Cholera when I heard the pilot come on the intercom. I pulled back my turquoise Beats by Dr. Dre headphones off one ear, enough to hear the pilot say something about a serious storm we’re heading into and to make sure we stayed seated and had our seat belts buckled. I honestly couldn’t understand much more than that, but this wasn’t just the ho-hum stay-in-your-seats-while-we-head-into-a-little-system instruction. This pilot seemed a little more parental with a dash of “or else you may die” tone.

I’ve never heard that tone come from the cockpit before.

The guy in the middle seat next to me asked me to open the shade on the window just as I was lifting it.

“Whoa,” he said. I don’t know much about clouds, but these looked dark. Heavy. Ugly.

“Yeah,” I responded as though I knew what I was talking about.

Back to Shakira lamenting in her sad, sad way on the soundtrack. The music feels gloomy, but it’s a pretty kind of gloom and that’s why I like the soundtrack. It helps to relax me on flights because I hate flying. I have my go-to music whenever I fly, which is this soundtrack and the soundtrack from Pride and Prejudice—the Kiera Knightly one. I also go to Kind of Blue by Miles Davis if I remember to download it from the cloud before I travel, but I mostly forget to do that.

The first series of bumps came and I almost grabbed the leg of middle-seat guy because that’s what I do when I fly with my husband—I grab his leg and dig hard into his quadricep, leaving finger impressions if there’s even the slightest bump or shift. I think he hates that but probably not more than I hate turbulence.

I won’t lie. A few expletives left my mouth. There’d be jerks (forward and backward, then left and right) and then there’d be a sudden jolt that would make me catch my breath (followed by a whispered expletive), like someone had just sneaked up on me. This went on for a good 10 minutes and then we dropped.

Down, down, down the plane dropped. Not nose first or like a dive, but a drop like the floor just dropped from beneath our feet. We were falling from the sky.

Drinks were flying in the air—not just off tables but up and over rows into people’s laps behind them. There was a chorus of WHOA! from the plane and then…

Yes, children were laughing. We had a plane full of children on their way to Orlando and they were giggling and laughing through it all. Their amusement park vacation has begun.

I’m thinking, This is how I’m going. Yet, the children’s laughter actually calmed me. If I’m going to die I think hearing children laugh with utter joy is the way to go. My eyes were watery, but I didn’t cry. The kids helped me get a grip on my emotions and kept me from completely losing it.

Is this how the last seconds go? I’m not sure.

There was not a flash of my life before my eyes. I wasn’t thinking about anyone (I should have) except, Crap, I’m going to die right now. Right over some random place.

There were more bumps and jolts and a female voice comes on the intercom. “Parents. Keep. Your. Children. Secured. In. Their. Seats!”

And then I felt the plane get ahold of itself. We were flying smoothly again. Our brief moment of terror had ended.

A kid laughs and demands, “Do it again!”

But I wasn’t going to die. Not this time.

10 thoughts on “Kind of almost sort of dying.”