My husband and I passed by the long serpentining line of people and we were ushered through a no-waiting line, as if we were VIPs with exclusive privileges beyond the velvet rope. “Hey, this is great!” I told my husband. “It’s way faster doing it this way.”

My special situation got him rushed through as well, but in the end, it really wasn’t fast for me at all. I was navigating an airport in a wheel chair and what should have taken me only 30 minutes to get from curb to gate took me twice as long. 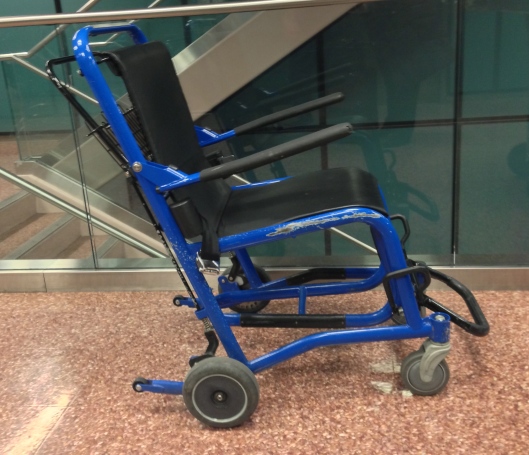 My airport mode of transportation 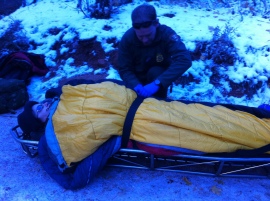 Forty five days earlier I had broken my leg in Zion National Park followed by surgery (a plate, 2 pins and 5 screws). The accident put me in a wheelchair and eventually on crutches before I finally was able to walk again, yet I still had to travel for work. In fact, I had two business trips and if you think traveling through an airport is a pain, try doing it when disabled. 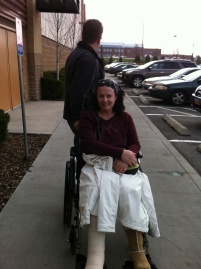 Fortunately, Steve had the flexibility to travel with me and be my sherpa throughout the whole ordeal of travel. The poor guy had to drag both his bags and my bags around and it became no surprise to me that he suffered months of back pain after doing this for both the trips.

Moving in front of the TSA line is a joy, yes, but the pat-down is excruciatingly long and arduous. Everything gets swabbed and TSA was never consistent in its procedures. Every airport seemed to do things differently. One airport let me remain sitting in my wheelchair. Another made me stand up–balancing on one leg. Another airport (Orlando) made me go into a little x-ray pod room (quite strange) where I had to sit on a table and they x-rayed my whole body and they gave me a pat down. Was this all really necessary? Another airport’s TSA even asked me to remove my boot, to which I said, “Are you kidding?” and then the agent decided not to pursue it. 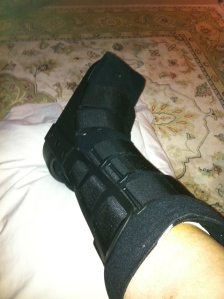 I wore this thing for 3 months. Ugh.

While I was being dismantled like a live bomb, my husband was meanwhile trying to collect all our carry-ons (quart-sized bags of liquids, lap top, purse, both our bags) from the conveyor belt like Lucy and Ethel when they worked the chocolate factory on I Love Lucy.

Wheeling around the terminals

When you book your travel you have the option to let the airline know that you are in need of wheelchair assistance. As a result, all airports (a total of four during both business trips) had an agent available when we got off the plane, but it was a little confusing when we first arrived to the airport. Generally, once we arrived at security the airport wheelchair agent could be called on, but there was a wait and was such a pain.

Hats off to the folks who have to wheel those of us around the airport. The only annoying thing was that nearly all of them made me wear the seat belt on their wheel chair. Oh for Pete’s sake, we weren’t going very fast. I mean, really?

Bulkhead is your best bet (Actually, First Class is)

Only on one leg did I get upgraded to First Class, which was incredibly helpful since I was wearing a boot. (I was upgraded due to my frequent flyer status and not because I was disabled.) The other legs, though, I sat in bulkhead. My Corporate travel agent made those arrangements for me on my first trip, but on my second trip she said the airline indicated that I had to wait until I got to the airport, which was a complete pain and created a little more stress as I worried about not getting bulk head. (I eventually did get it, but my husband couldn’t sit with me.) Again, inconsistencies.

A shout out to the flight attendants who were particularly helpful and sympathetic to my situation, which is always nice, especially in grabbing my crutches for me when I needed to get up and use the bathroom, although I panicked a little when one took my crutches and stowed them who knows where. I didn’t like not having them nearby.

You do get to board first (though after First Class in some instances, which is just plain weird and stupid), which if you’re looking for perks is nice but when you’re traveling by wheelchair or by crutches, who really cares in the end.

By being limited in mobility (and not used to it at all) I felt like I was moving like a sloth. You can’t easily reach for anything, you can’t properly sit to work on your laptop and the swelling from the flight doesn’t help either. Let’s face it, being injured is a complete pain and you can’t do anything normally. You rely so much on help from others. Thank you so much people who helped me along the way.

So what did this teach me?

Patience. That’s what I’ve learned. Yes, me who is not at all patient. Though I think Steve believes I could use some more training in that area. I think there are easier ways than breaking my leg in order to achieve that.

Also, how come airports are doing away with the golf cart shuttles in the terminals? That would have been a much better ride.

6 thoughts on “Navigating the airport in a wheelchair”