You would have never known that 24 hours earlier you couldn’t see but five feet in front of you. But that was Bryce Canyon National Park the day before and this day we were at Zion National Park and it was a bright, warm October day.

The day before. What do you mean you can’t see Bryce Canyon?

The next day: Zion National Park’s clear skies show no hint of the neighboring fog.

This was day two of my third rendezvous with Steve. To recap, just six months earlier we met in Scotland, then met up again three months later in London and Bath, England, and three months after that we were rendezvousing in my home state of Utah, discovering National Parks just four hours sound of where I live.

And things were going very well.

So well that I took the clouds parting as a sign. A sign that I was officially in a long-distance relationship, which was something I swore I would never do.

I swore I would never do a lot of things.

Fly across the ocean to another country to meet a guy.

And, yeah, find myself in a long-distance relationship.

Walking the trail, hand in hand with Steve, I couldn’t feel more lucky to have ignored all my “rules.” This is perfect. Absolutely perfect. The trail ended oddly at the bank of a shallow river and as I began to turn around to walk back to the trail head I was being pulled in the opposite direction into the river.

“Wait! We’re going into the water!” I felt the water up to my calves.

“No we can’t,” I insisted. He still was pulling me along. Do I stop him? Do I follow him? I don’t want him to think I’m not fun.

“Sure we can. Everyone else is,” he assured me.

And that’s when I noticed that there were others hiking the river. (I later learned that this was called “Hiking the Narrows.” 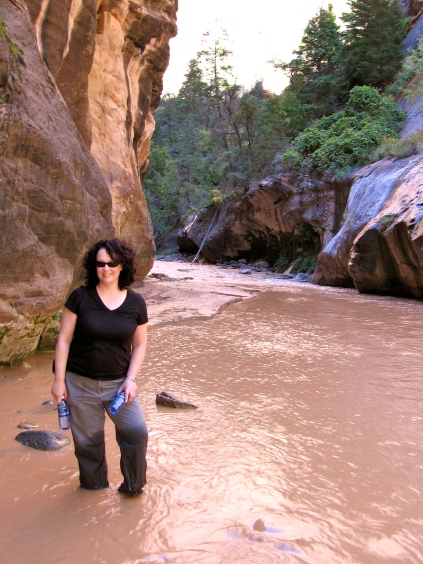 Trying to look cool as I hike the Narrows.

The water was cold but after a few minutes I didn’t notice it any more. The bottom of the river was full of pebbles and rocks and I might as well had been walking on marbles. Everyone else made it look so easy. I was desperate not to look stupid. I wanted Steve to think this was no big deal, like I do it all the time. 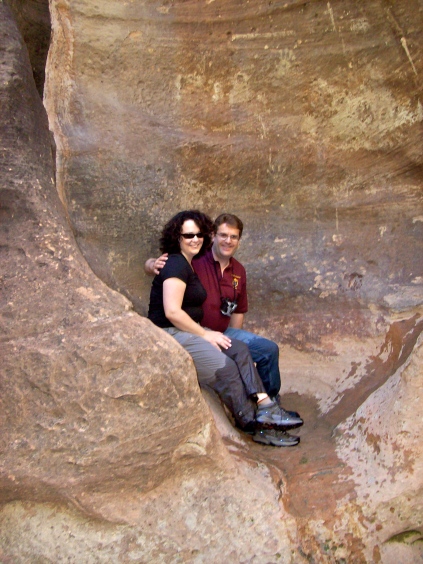 Posing in a kettle during our hike.

After awhile I began to get the hang of it. Just walk slow and steady. Keep your balance, I kept telling myself. Just pretend you do this all the time. Because normally I would never do something like this. I never thought of myself as an adventurous person.

But getting on a plane to rendezvous with a stranger in Scotland was adventurous.

And so was repeating that in Bath, England.

Plus that whole long-distance relationship thing.

Sometimes people drag you into the river to go on an adventure and experience something new on a warm October day with cobalt blue skies. 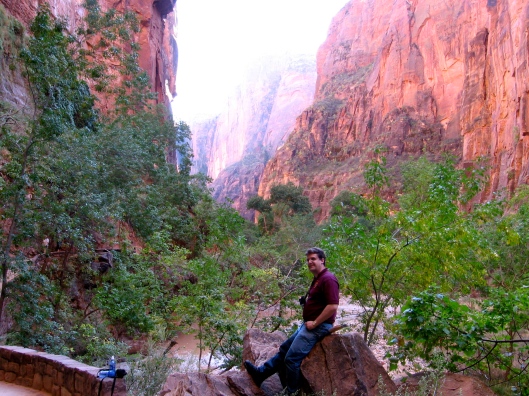 Sure, I’d follow this guy into a river. Anytime.

2 thoughts on “When the clouds parted”